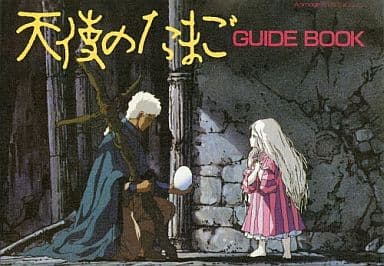 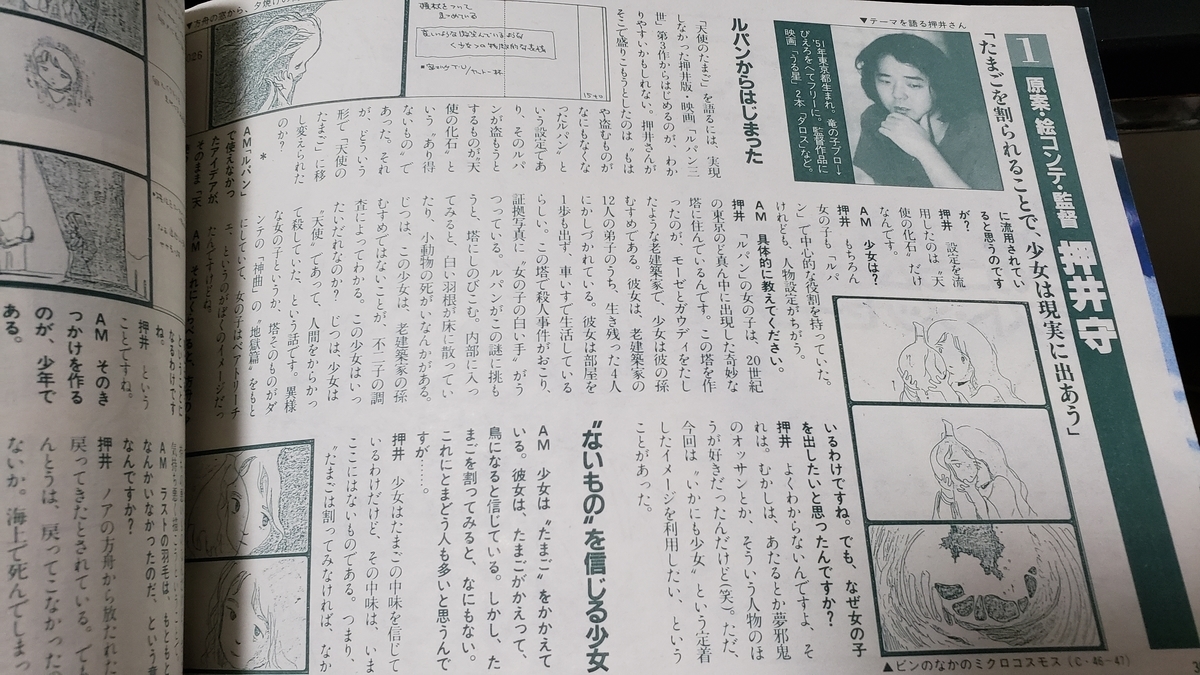 This is an extra item of Animage Dec. 1985 issue. Animage used to release this small anime-film guide book series.

Most pages are filled with screen captures, story summary, and Bible quotes, but it also includes some interesting interviews.

In Oshii's part, he says that only the fossil of an angel was brought from Lupin III. The girl in Angel's Egg is similar to the girl from Lupin III project, but they have totally different backgrounds, he says. The girl in Lupin III is a daughter of a mysterious architect. Lupin finds out that her true identity is an angel. Oshii also says that she plays a Beatrice-type role. On the other hand, the girl in Angel's Egg is an ordinary girl.

At the end of the film, it is revealed that the egg is empty. Oshii says, it means that the girl believed in a nonexistent thing. In other words, the egg symbolizes hope or dream. As long as she believes in it, she can't face the reality. He also says that the story structure is based on Tennessee Williams' The Glass Menagerie. The boy's cross-shape canon symbolizes burden of the reality.

Oshii says, "The Bible says Noah's dove came back, but I suppose it didn't come back in reality. It died or flew away. The boy can only see feathers without the dove. I hope that scene will evoke some emotion in the audience." He also says that the girl's ending shows salvation.

As for the reason why Oshii featured Christianity, he says, "Anyone has their own background. To me, it was Christianity. That's all. I have some weird faith and images of the apocalypse." He did it in the abstract fantasy form just because Yoshitaka Amano's character design doesn't fit Japanese environments.

Oshii says that Angel's Egg is a futuristic/ post-Noah story, so maybe the girl is a descendant of Noah. But he also says that maybe the whole world is the girl's dream.

Most importantly, he says, "The destruction of the egg and the transformation of the girl's ego will change the shape of the world. I suppose only that part can convey a religious message." In other words, he says that religious symbols are actually not so religious. Angel's Egg is a story of self-transformation, and it is a religious story only in that sense.

Other interview pages tell nothing special. The illustration part includes some Ghibli animators.