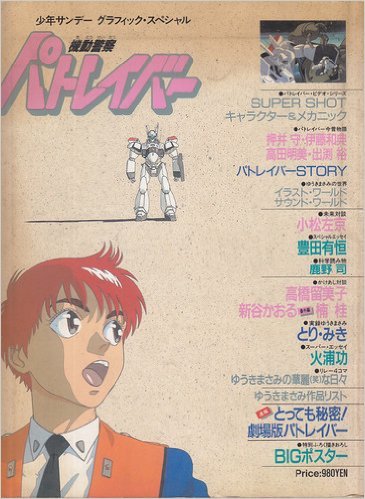 summary of Patlabor the OVA series

introduction to the Movie 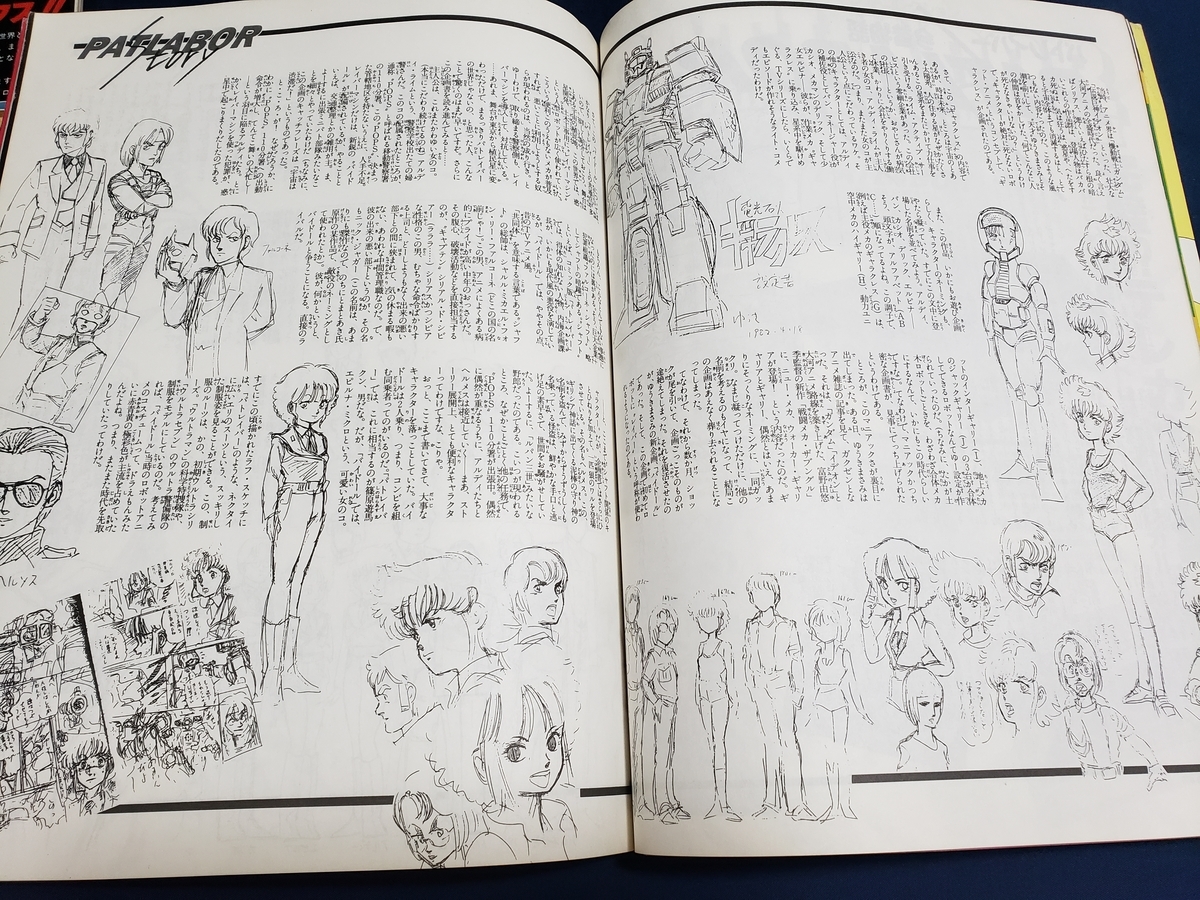 This is another volume of Shonen Sunday Graphic magazine.

It was released before the first movie, so it only covers the manga and the OVA.

The most important part is the explanation of the series's prehistory. Patlabor started from Masami Yuki's amateur project. When he was an office worker, he jokingly made proposals for non-existing anime projects with his friends. The title was "Scheherazade" at first. It's a space war story. A trainee girl controls a giant mecha and fights against enemies. That sounds very basic but, according to the magazine, there was almost no female sci-fi protagonist in those days.

The second project was called "Denko Sekka Galacress". It was supposed to be a mecha anime where "characters don't die". Most mecha anime feature wars and death, so Yuki put an antithesis of it. (That concept is partly inherited by Patlabor.) However, Yoshiyuki Tomino released Xabungle around that time. Galacress's main mecha was very similar to Walker Gallia, so Yuki lost interest in it.

The next project was called "Bidoll". It's another space sci-fi anime, but the mechas were named "labor machines" this time. The protagonist is a cute female police officer. Her uniform is very similar to SV2's uniform. Villains' organization is called "Falcone Schaft". It got pretty close to the Patlabor we know.

At this phase, Yutaka Izubuchi, the mechanic designer of the Patlabor series, joined the group. He got interested in Bidoll, so he showed the project to a sci-fi writer called Ko Hiura. The title, "Mobile Police Patlabor", was made at that time.

The basic premise was pretty different. First of all, Tokyo city is pretty dangerous in this version. Many yakuza labors appear. Second, the protagonist's name was Tsubasa Hayami. Kanuka's archetype was already there, but she was called Nordica. Unlike the OVA, it had more girls than old male characters.

The creators gave a presentation to Sunrise, but Sunrise declined it. Izubuchi says "If only Masami Yuki had become famous a bit earlier."

In 1986, Izubuchi asked Kazunori Ito to join the project. Izubuchi explained the series's concept, but Ito didn't get it. Ito says "But-chan(Izubuchi) sucks at presentation."

However, Ito got a good idea later. "Let's do something like Police Academy". Izubuchi liked that idea, so Yuki, Izubuchi, and Ito re-developed the project. Akemi Takada, the character designer, joined the group at that time. (Takada was Ito's wife in those days.)

At the Ito family's Christmas party, they gave a presentation to a producer of Bandai. His name is Shinichi Unosawa. They wanted to make a TV series, but it ended up in a 6 volume OVA series. (Unosawa says that only 6-volume OVA was possible with the minimum budget. Headgear members were unpaid until the first movie.)

It was supposed to be an omnibus directed by various anime directors at first, but Mamoru Oshii joined as a series director. According to the magazine, "Oshii said he'd focus on the 'hired director' role." His job was to organize other members' ideas. However, his first storyboard and mecha design were totally different from the original concept. (That storyboard was reprinted in TVA&OVA ARCHIVES and some other brochures.) Oshii ignored Izubuchi's mecha design and basic premises of the series from the beginning. He wanted to do more grounded and mature mecha anime, not young police officers' heroic story. Other members rejected the storyboard.

Oshii still wanted to change the main labor's design, so he took a majority vote at that time. Oshii lost by 3-2. Oshii's labor idea was turned into Asuka MPL-96.